Polluted air causes Illness. Trees clean the air and protect health. Bridgeport has some of the most polluted air in the country and high rates of illness. Bridgeport is sanctioning thousands of trees to be cut down in Remington Woods, that protect our health.

“Adults in the city have nearly double the rates of asthma, diabetes and obesity as adults statewide…” Ct Post.

The area around Remington Woods had a lower rate of asthma and other illnesses than the rest of the city.

The pandemic is worse in areas where people are sicker. Bridgeport had the highest number of Covid19 cases of any city in the state of CT. The percentage of people who die from the virus is very high in Bridgeport.

The cost of air pollution is extremely high, in illness, deaths and money. In New York in just 6 months in 2020, it is estimated that air pollution has cost 2,500 deaths and $5,700,000,000 US Dollars. To cut down trees which clean the air and so greatly benefit our health, economy, an environment is tragic.

Many trees have been cut down in Remington Woods in Bridgeport, according to satellite maps. Many more are planned to be cut. If trees are cut pollution and illness increases. Illness will increase even without the pandemic as trees are cut. When a pandemic hits, the people of Bridgeport will be more vulnerable to illness and death, if the destruction of Remington Woods is allowed to go forward.

Global heating is increasing heat. Heat can put people at risk of illness, and cause stress.

Trees Cool the Air, Protect Us from Heat.

July, 2020 Fairfield County, heat is approaching 100, and is combined with an air pollution alert for ozone. The heat wave has continued for several days. Heat in this range increases chance of illness. This will worsen as global heating advances. Bridgeport is sanctioning the cutting down of thousands of trees in Remington Woods that cool the air, and help protect us from heat, increased illness and urban stress.

Could the cutting down of trees in Remington Woods be a factor in the recent flooding?

“In my eight years residing in the Thomas Hooker Precinct; I have NEVER had so many homeowners/tenants contact me regarding significant flooding in their homes.” writes Bridgeport City Councilwoman Maria Pereira”

“A number of homeowners on Ohio Avenue alone suffered significant flooding in their basements on Tuesday with between 2-4 ft of water on Tuesday, July 2nd. They contacted their insurance companies and many stated that flooding damage caused by faulty sewers would not be covered. This does not appear to be raw sewage but water with dirt/grit.

One woman put $4,000 on her credit card to have a professional company come out to clean, remove wet sheet rock, pump out the water, and provide fans. The fans were running in her basement when the second flood hit on Friday, July 3rd.

One two family home lost both their water tanks and furnaces and currently have no hot water. He showed me the drain in his basement floor where the water came from.

I was contacted by the Maintenance Manager of Nob Hill Condominium stating he had never seen anything like it in 15 years. The flooding went up three stairs from the sidewalk into shared common hallways.

Every homeowner had cleaned their basement or were in the process when they were flooded again on Friday. This was an absolute disaster for these families.

Most only have maximum coverage of $10,000 -$12,000 in property damage, however the insurance companies are refusing coverage ….” Bridgeport City Councilwoman Maria Pereira.

“This was an absolute disaster for these families.”

HOW THE WOODS PROTECTS US FROM FLOODING

One of the many life support services the Woods provides is helping to prevent flooding. Destruction of the Woods increases the chance of flooding. Trees, other plants, and soil absorb and hold water. Unlike pavement, roads or buildings  that cannot absorb water, which leads to run off, overpowering the sewer system and flooding. During heavy rains the water is absorbed by the Woods. That protects the people from flooding and nourishes the Woods, which will protect us from many other threats as well.

Global Warming is causing increasingly severe weather. The Woods acts to protect us from flooding, heat, lessens the severity of storms, and absorbs carbon. The Woods protects us.  We need to protect Remington Woods for our safety.

The high elevation on the Stratford side of the border might be a factor contributing to flooding the areas around the Woods. The destruction of trees in the woods could increase the chance of flooding.

• The plain is about 55 ft average. The high ground is well over 100 ft average with a steep slope. That is about 45 ft difference from the plain to the high area at the border, which also continues well past the Woods. The height of over 100 ft and steep slope could contribute to the possibility that the drainage might spillover in a heavy rain, especially with the large patches where trees have been cut.

1. Destruction in the Woods, lessens absorption of rain.
2. Elevation of flooded areas.
• Remington Woods is about 55 ft to about 138 ft
• Broadbridge Ave & Second Hill Lane Stratford 138 ft
(top of  Woods)
• Ohio Ave. (site of severe flooding.) 49 ft.
• Viaduct at East Main and Louisiana Ave ( flooded)  52 ft
• Jennings Ave (flooded) 66 ft
•  Glenbrook Rd  and Broadbridge Rd (flooded) 66 ft
It will be much worse for the neighborhood in the future if the full destruction goes ahead as planned. The damage must be restored, and further damage prevented.

TREE DESTRUCTION
There has been extensive tree cutting in the Woods, to the top, to the right and to the left of the drainage.

There has been severe destruction of trees and vegetation in Remington Woods during the EPA enforced clean up of pollution. This greatly lessens the ability of the Woods to protect us from floods, air pollution, illness, heat and many other risks. Much more destruction is planned. At the end of this year full destruction could begin.

Pictured below are old and new google satellite images of Remington Woods. It appears that many trees have been destroyed. The soil and vegetation that absorbs water and prevents flooding appears to have been destroyed, covered over or depleted in several places. That could leave  the surrounding areas more vulnerable to flooding and other risks.  Below you can compare an older image of Remington Woods with the current one.

• The planned destruction of the Woods could take place as early as the end of 2020.
• It will increase pollution, noise, traffic, heat, flooding and illness in the neighborhood.
• It will kill several thousand trees, wildlife, and destroy the forest.
• It will deprive the people of Bridgeport of all the life support benefits the woods provides, and put us a risk for harm.

DuPont, a multi billion chemical corporation is one of the biggest polluters in the world. They have knowingly contaminated communities for decades. 98% of all animals and humans in the world have toxins in our blood that they produced. DuPont’s spin off Corteva owns the Woods.  Corteva although a new company has  been caught illegally dumping toxic waste into a community, and was forced to stop cruel animal experiments. They have produced a chemical that causes irreversible nerve damage in fetuses and children and kills birds and wildlife. They will be making the decisions as to what goes into the woods in your neighborhood. Unless we stop it.

Remington Woods needs to be preserved as a Wildlife Nature preserve in it’s entirety, with walking paths. Only that will insure the many real life support services it provides will continue to benefit the surrounding neighborhood, Bridgeport, Stratford and Fairfield county.

Lynn Haig, Director of Planning said, “We talk about being healthy, being equitable, being live- able, embracing nature, …Zoning is the tool to achieve those values …”

We need to change the zoning of the entire Woods from light industrial to a Nature wildlife preserve. It is the only way to live up to those values.

We have only 5 months to prevent the Woods from being destroyed, 32+ acres of unneeded buildings, plus roads , a parking garage, infrastructure, walkways, in 17 locations in the Woods. 17,7% is the amount of vacant commercial buildings in Bridgeport that should be used for commerce instead.

We need to preserve the Woods to help it protect us from preventable harm.

2. Restore the Damage
Restore the damaged areas by planting native trees and vegetation, non GMO, in accordance with how a  Natural forest would be.

3. Preserve the Woods
Preserve Remington Woods in its enterity as a wildlife Nature Preserve with walking paths, in perpetuity, no development, respectful access.

Here is a flyer you may print as is and distribute, without changes. Thank you for any action you take to keep us all safe and well 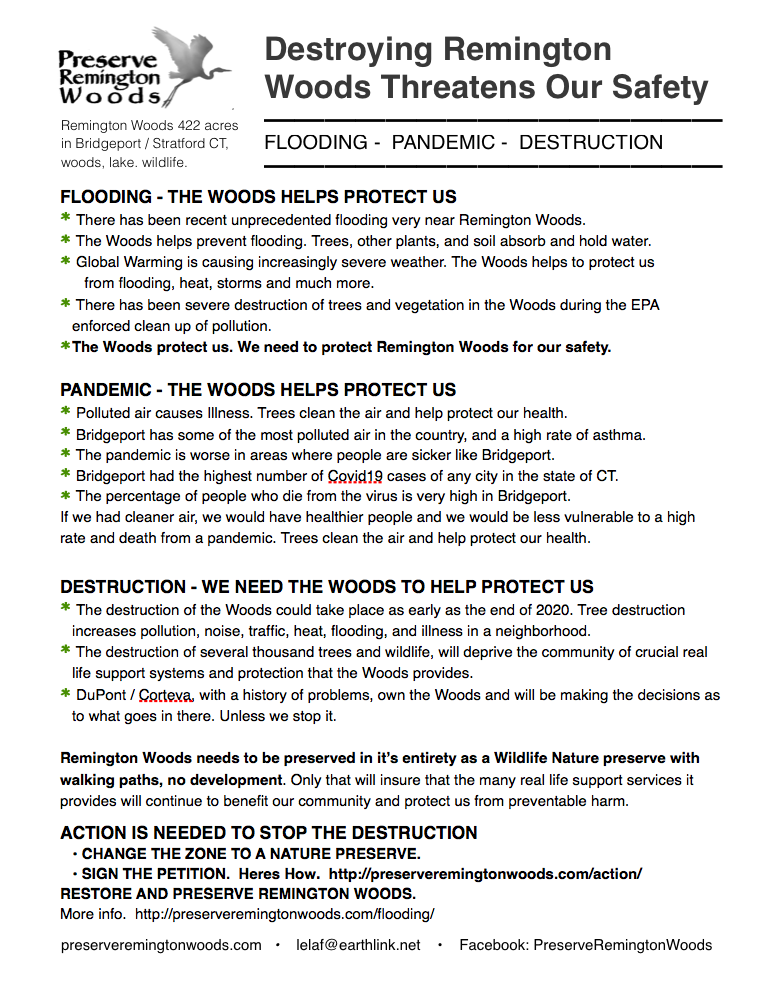